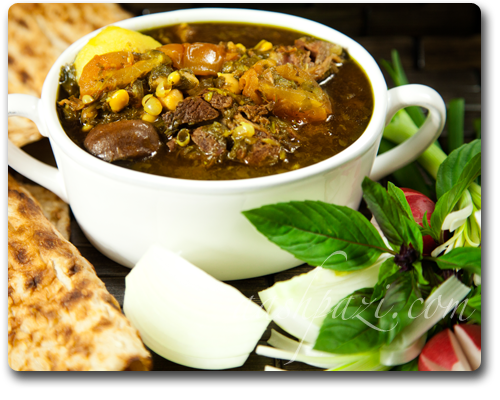 3 lbs (1360 g) Beef Shank 1 Can 15 oz (425 g) Chickpeas 1 Can 15 oz (425 g) White Beans 3 Garlic Cloves 1 Large Onion 5 Dried Limes 2 Bunches Cilantro 5 Small Potatoes 5 Small Tomatoes 1-2 tbsp Savory Turmeric, Black Pepper Powder, Salt PREPARATIONS: 1- Mince the Cilantro. 2- Soak the dried limes for 10 minutes. DIRECTIONS: 1- Place the beef shank/s in a pot. Add water (boiling water) until covers the beef. 2- Bring the water to a boil. 3- Remove the foam using a spoon, , continue removing the foam until clear and no foam is produced. 4- Add the garlic cloves to the pot, chop the onion in 4 pieces and add to the pot. 5- Cover the pot with a lid, simmer for 2 hours over medium heat until the beef is cooked (Add more water if needed). 6- Add small potatoes to the pot, cover it with a lid and continue simmering for 30 more minutes over low heat. 7- Add a can of chickpeas, white beans, 5 small tomatoes, minced cilantro, savory, turmeric, black pepper powder and salt. 8- Poke the soaked dried limes with a knife and add to the pot. Add boiling water and stir thoroughly. 9- Cover the pot with a lid, leave a crack to allow the steam to scape. 10- Simmer for 45 minutes over medium heat.

Abgoosht or abgusht or sometimes called Dizi (Ab: Water, Goosht: Meat) is a Persian traditional stew. One of the main ingredient of abgoosht has been lamb shank, but nowadays beef shank is more preferred. Since abgoosht has been around for so many years in ancient Persia, it has been advanced and changed in different parts of Iran, but what remained the same is the way it's served and consumed. The water of abgoosht or the soup is consumed with spoon, but the remaining ingredients are mashed with a meat masher and eaten with traditional breads such as Sangak or Taftoon, with a side of onion, basil and radish. Depending on beef shank you choose for you abgoosht, the calories may vary. 3.5 ounces (100 grams) of abgoosht has 149 calories and 24 calories from fat. It contains high amounts of dietary fiber, iron, phosphorus, potassium, selenium zinc and vitamin C. 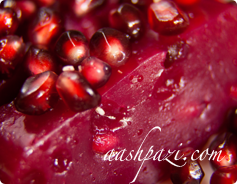 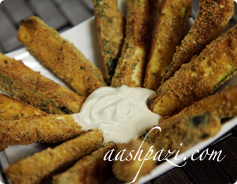 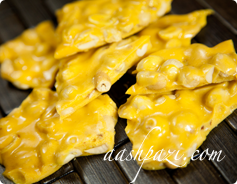 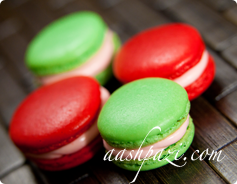 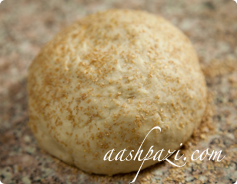 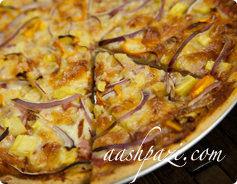